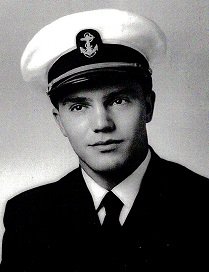 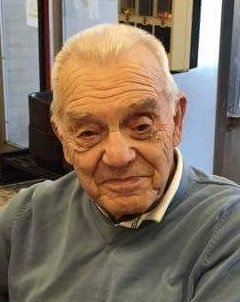 After graduation, Vic enlisted in the U.S. Navy as an aviation cadet. After successfully completing numerous training programs, he received his Navy "Wings of Gold" in the spring of 1944.  After some operational training in torpedo bombers, he qualified for carrier landings on Lake Michigan. He reported for active duty on the west coast of Alamedanas as part of a composite torpedo and fighter bombers squadron. He departed for Pearl Harbor, training two months at Hilo, Hawaii, with additional training in bombing, rockets, survival training and night carrier landings. In the summer of 1945 he departed for Guam to pick up the carrier USS Anzio and the 7th Fleet in the Western
Pacific, where he flew anti-sub patrol until the Armistice was signed, then covered the occupation of Korea. The plane he flew was a TBM Avenger — torpedo bomber, the largest of the carrier-based aircraft in the U.S. Navy at that time. His squadron was credited with sinking at least one Japanese sub. Once the battle of Okinawa was over, his ship was scheduled to be part of Taffy 3 — the leading assault group that was to clear the way for the invasion of Japan. But the two atomic bombs were dropped and the war ended. He was the recipient of the American Pacific Campaign Medal and Pacific Victory Medal. He went on to fly in the Navy Reserve Squadron at Niagara Falls Airport from 1952-1957. He was honorably discharged from the Navy in 1959.

After returning home, he attended the University of Buffalo, graduating in 1949 with a degree in education. He played football at UB, starting as a running back, averaging 9.9 yards per carry. He also played defensive back, and was named to the All-Western New York team. Vic continued to shine athletically in a variety of leagues throughout the area, including the YMCA Blue Devils basketball team, winning tournaments in Buffalo, Rochester and Gloversville and placing as high as fourth in a national tourney in Brooklyn.

In September of 1955 he became the physical education teacher and assistant football coach at Lockport High School. He also coached football, track and soccer and then supervised the swim program for 15 years. He taught in the Lockport school system for 32 years, retiring in 1981.  Vic was inducted into the Lockport High School Athletic Hall of Fame in 2008 and the Distinguished Alumni Hall of Fame in 2012. He was a member of St. Joseph's Church, VFW,
American Legion, the Elks, Navy Marine Club, the LWTC Club, and was a long-time member of the Anjo Club and more recently Lunch With The Coach.

Although Vic's family would love to give him the kind of sendoff he deserves, due to the pandemic, private services will be held at Prudden & Kandt Funeral Home at the convenience of the
family. A celebration of his life will be held at a later date, burial at Cold Springs Cemetery. In lieu of flowers, the family requests memorials be made to either Niagara Hospice, 4675 Sunset Dr., Lockport, NY 14094 would be appreciated.  For condolences or to share a special memory of Vic, please visit pruddenandkandt.com.

Share Your Memory of
Victor
Upload Your Memory View All Memories
Be the first to upload a memory!
Share A Memory
Plant a Tree