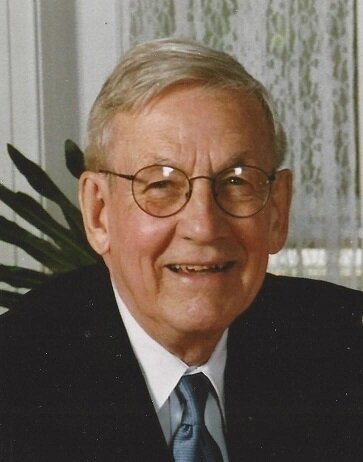 Raymond Bugenhagen of Lockport passed away on May 5, 2022 at the age of 96 years.  He was born on October 5, 1925 in Lockport to the late Herman and Lydia (Dewitz) Bugenhagen.  Ray served in the US Navy during WW II from 1943-1946 and was a signalman 2nd Class aboard the USS LSM 532.  He earned his graduate degree from GMI, Flint, Michigan in 1952, retiring as a Superintendent of Industrial Engineering for Harrison Radiator, GMC  in 1983.  Ray was an active volunteer at ENH – Lockport site for several years and was an avid fan of the Boston Red Sox.

Relatives and friends are invited to a Memorial Mass Wednesday, May 11th at 10 AM to be celebrated in St. John the Baptist RC Church, 168 Chestnut St., Lockport.  Donations to a charity of one’s choice would be appreciated.  Visit pruddenandkandt.com.

To send flowers to the family or plant a tree in memory of Raymond Bugenhagen, please visit Tribute Store
Print
Wednesday
11
May