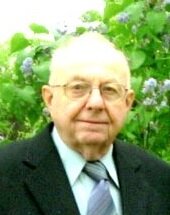 Please share a memory of Franklin to include in a keepsake book for family and friends.
View Tribute Book

Franklin K. Meyers passed away February 7, 2022 in Buffalo General Medical Hospital.  Born December 20, 1932 in Pendleton he was the son of George and Florence (Stegner) Meyers.  He served in the US Army from 1952 to 1954 and worked for the Niagara County Highway Department for 30 years where he was a mechanic.

Relatives and friends may call Saturday, February 12th from 9:30-11 AM with services at 11 AM all in Prudden & Kandt Funeral Home, 242 Genesee St., Lockport.  Interment will be in Bear Ridge Cemetery.  Donations to Niagara Hospice, 4675 Sunset Dr., Lockport, NY 14094 or to The Gideons International Processing Center, PO Box 97251, Washington DC 20090-7251 would be appreciated.  Visit pruddenandkandt.com.

To send flowers to the family or plant a tree in memory of Franklin Meyers, please visit Tribute Store
Saturday
12
February

Share Your Memory of
Franklin
Upload Your Memory View All Memories
Be the first to upload a memory!
Share A Memory
Send Flowers
Plant a Tree