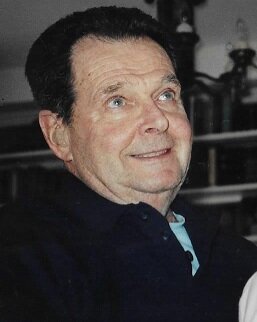 James “Jim” H. Ferguson went to his eternal home January 5, 2022, surrounded by family.  Born March 20, 1930, in Newfane he was the son of Hiram and Ruth (Klumpp) Ferguson.  James proudly served in the US Air Force from 1950-1954.  He owned Willett Ferguson Concrete Construction, Synthetic Granite Vault, and served as caretaker for Wrights Corners Cemetery. He was very active in local politics and held several leadership positions in his church. He was most proud of his family and often bragged about their accomplishments. His favorite hobby was his vegetable garden and he received great joy from sharing his produce or bartering it for services.

Memorial Services will be held at First Presbyterian Church Aug 13th, 2022.  Visit pruddenandkandt.com. Memorial donations may be made to https://www.michaeljfox.org/donate in lieu of flowers.

Share Your Memory of
James
Upload Your Memory View All Memories
Be the first to upload a memory!
Share A Memory
Plant a Tree