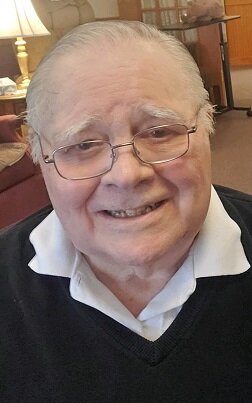 Brian White passed away at Watson Fields Assisted Living in Dover, New Hampshire after a period of failing health on October 21, 2021 with his two daughters by his side.  Brian was born on April 3, 1939 in Lockport, NY and was proud to tell anyone who would listen that he was never in a hospital until his hip replacement in 2008, not even for his birth.  He was the son of Francis D White and Gertrude (Pless) White of Lockport and older brother of Andrea (White) McFadyen. Brian graduated from Lockport Senior High School in 1957, where he met and dated his future wife Linda (Culver) White. Brian liked to tell folks that he played football in the NFL and he did the Niagara Frontier League.

After high school, Brian attended Valparaiso University where he joined the Sigma Phi Epsilon fraternity.  He learned a few memorable drinking songs which he could recite from memory up until his final days. However because of such activities, Brian transferred to Tri-State University (now Trine University) from which he graduated in with a BS in Business Transportation.  After graduation, Brian returned to Lockport to work in the family trucking business, White’s Transportation.  His father had started the company and Brian worked there until his retirement in 1996. He also married his HS sweetheart, Linda in 1964 and the two of them built their home on Heather Drive in Lockport.   Brian lived there until his health issues caused his daughters to bring him to New Hampshire to be closer to them.

Brian joined the Air National Guard in 1963 and was assigned to the 107th Tactical Fighter Group out of Niagara Falls. In 1967 Brian and Linda celebrated the birth of their first daughter, Michelle. In 1968 however, his number got called and Brian was activated to Vietnam.  He eventually reached the rank of Staff Sergeant E5 and was stationed at Tuy Hoa Air Force Base in Vietnam. He was in Vietnam for 7 months, 23 days, 16 hours and 22 minutes but no one was counting… For anyone that knew Brian, his active duty was cut short by the need to be present at the conception of his 2nd daughter, Denise. Brian was very proud of his service to his country, attending Tuy Hoa reunions during his retirement and telling stories and wearing his hats up until his last days.  Brian was involved in many clubs and organizations throughout his life.  He was an active member of Mt Olive Lutheran Church until his move to NH.  He’s been a member of Olcott Yacht club for over 50 years, even maintaining his card in NH.  Although no longer sailing, he enjoyed having dinners with family and friends there.  Brian was also a member of the VFW, Sigma Phi Epsilon Fraternity, and Club 60 Dinner & Dance Club.

Unfortunately, Brian’s wife Linda passed away from cancer after 32 years of marriage.  Brian remarried Joan Sposito a couple of years later and they were married for 13 years before she also passed away.  Brian’s heart was always in Lockport however living in NH allowed him to attend his grandchildren’s many events from sports to graduations.  He was also able to spend time with his daughters.

Relatives and friends may call Tuesday, Oct. 26th from 4-7 PM where funeral services will be held Wednesday, Oct. 27th at 10 AM.  Interment will be in Cold Springs Cemetery.  Donations can be made in his name to:  Watson Fields Assisted Living, 201 Watson Rd

To send flowers to the family or plant a tree in memory of Brian White, please visit Tribute Store
Tuesday
26
October

Share Your Memory of
Brian
Upload Your Memory View All Memories
Be the first to upload a memory!
Share A Memory
Send Flowers
Plant a Tree