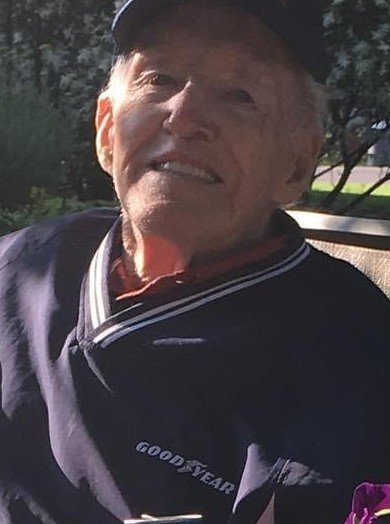 Frederick Eugene Zimmerman, a longtime resident of Lockport New York, passed away Friday June 18, 2021, at his home with his loving family by his side.

Born on December 10, 1922 of the late Clarence and Mabel (James) Zimmerman.  Frederick grew up on a farm in Cambria, New York.  He attended Lockport High School.  He joined the United States Army, serving during World War II in the Pacific Theater, receiving several medals for his valor and service.

Following his honorable discharge in 1946, Frederick worked for Hollywood Candy Company traveling the East Coast.  During this time, he met his loving wife of 70 years.  Frederick then attended Bryant and Stratton Business School. Following his graduation, he joined his father in the family business.  In 1958, he and his brother took over Zimmie’s Tire Service.  After 30 years of working Frederick retired, spending winters in Central Florida.  He enjoyed golfing and fishing. Frederick was a former member of the Red Jacket Lodge 646.

There will be no prior visitation.  A Funeral Service will be held Monday June 21st at 11 AM in First Presbyterian Church, 21 Church Street, Lockport.  Interment will be in Chestnut Ridge Cemetery.  The family suggests that in lieu of flowers, memorials take the form of donations to the Niagara Hospice, Inc. 4675 Sunset Drive, Lockport NY 14094-1231.

To send flowers to the family or plant a tree in memory of Frederick Zimmerman, please visit Tribute Store
Print
Monday
21
June