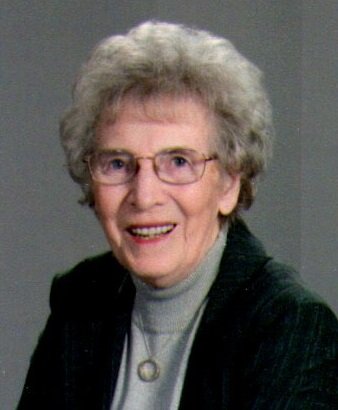 Margaret “Etta” Arnold, 94, passed away November 19, 2020 peacefully after a short illness, she now joins her beloved husband Wesley.  Etta was born in Glasgow, Scotland August 14, 1926 to the late Margaret “Pearl” and Daniel Gray.  At the age of 18 while walking she met Lt. Wesley F. Arnold, it was 1945 and Roosevelt had just passed away.  Wes needed directions to a church, that was where they married September 9, 1945 and their love affair lasted 69 years until his passing on January 31, 2013.  Etta came to America to join her husband with other war brides on the “Queen Mary”.  They lived in Geneseo and Albany while Wes went to college with their first born, Heather.  Then they lived in Wayland, NY with Wes’s Aunt Angie who took delight in teaching Etta how to cook and bake.  Etta was well known by all for her cooking and wonderful baking skills, especially “Empire Biscuits”, jams and jellies and the best pies ever.  The young couple settled in Lockport, NY and built a house on Dorchester Road in 1952 where the family grew up to add Laurie, Christopher, and Brian.

Etta was a 68 year member of the First Presbyterian Church where she served as an Elder and Deacon and many committees.  She spent 22 years working with the late Rev. Ike Orloff with the Interfaith Group making Peanut Brittle.  She was a past member of the Eastern Star.  Etta was currently a member of Mother’s Club, PED, and ENH Guild as chairwoman of equipment and donations.  She was an avid reader, and enjoyed being a member of her knitting club, the 'knitwits'.  She especially looked forward to Friday night dinner with “The Gang”.  She spent the last few months living with her daughter, Laurie, which she lovingly called “her house”.  Etta’s greatest joy was her family and spending time with them at Conesus Lake which was her summer home.

Per her wishes there will be no visitation.  A memorial service will be at a later date. Memorial donations to the YMCA Wesley Arnold Scholarship Fund, Niagara Hospice, or to a charity of ones choice would be appreciated.  Visit pruddenandkandt.com.

Share Your Memory of
Etta
Upload Your Memory View All Memories
Be the first to upload a memory!
Share A Memory
Plant a Tree