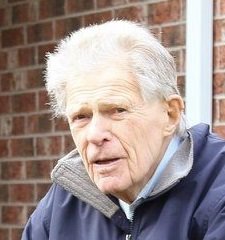 Obituary of Walter B. Brewer Jr.

It is with great sadness we announce the passing of Walter B Brewer, Jr. who passed peacefully surrounded by loved ones on November 23, 2019 at the age of 101.  His death was a result of complications from a fall off his bicycle.

Walt was born on July 8, 1918 in Framingham Mass. To Walter B Brewer, Sr. and Sarah Fletcher Brewer.  Raised on the family farm, Walt learned his work ethic at an early age.  As an MIT graduate, he became an aerospace engineer working at Curtis Wright, where he met his first wife, Beth L Sisson.  They were married December 1945 and lived in Buffalo NY where their children David and Nancy were born.

Walt’s job took him to many places, finally ending up in California, working there until his retirement.  In retirement, Walt loved to tinker and restore old cars.  Several of his cars have been used in movies.  Walt could fix anything and invented many gadgets to make life easier.

After the passing of his wife Beth, he met and married Joan Russ.  Walt and Joan lived several years in California and Oregon before moving permanently to Lockport NY.

Walt loved spending time with his children, grandchildren and great grandchildren, passing down his knowledge, work ethic and love.

Walt was preceded in death by his parents and first wife. Survived by his children David (Chris) and his daughter Nancy Burbott (JEB), grandchildren Jim and Dan Burbott, Kyle (Micaela) and Caitlin Brewer, his great grandchildren, Charlotte, Lily and Parker Brewer, and Walt’s wife, Joan Brewer.

Walt was a remarkable man and will be greatly missed by all who knew and loved him.

A memorial service will be celebrated Saturday, Nov. 30th at 11 AM in Mount Oliver Lutheran Church, 6965 Chestnut Ridge Rd., Lockport with a reception immediately following at the church, all are welcome.  His ashes will be interred at a later date in San Diego, Ca.  In lieu of flowers, donations can be made in his name to The Dale Assoc., attn: Development at 33 Ontario St., Lockport, NY 14094.  Visit pruddenandkandt.com.