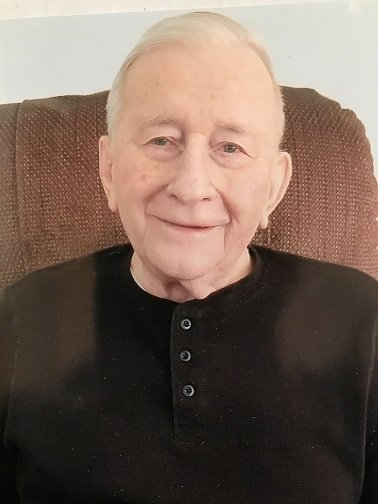 He retired from Guteral Steel, formerly Simmonds in 1983 after 32 years and he also worked for Niagara County Social Services retiring in 1993. He served in the U.S. Army from 1953 to 1955. He married Helen M. MacDonald at St. Mary’s Church in Lockport on April 18, 1953, who survives after 66 years of marriage.

John was a lifelong member and volunteer at St. Patrick’s Church (now All Saints). John was a long time member and treasurer of the AOH, he was the first Recipient of Hibernian of the Year award and produced monthly newsletters. John managed and played for several Semi Pro Suburban baseball teams.  He was a Notre Dame, Bills, and Yankees fan. He also enjoyed his computer and monthly breakfasts with friends. He also loved to do wood working in earlier years.

There will be no prior calling hours. A funeral Mass of Christian Burial will be celebrated at All Saint’s R.C. Parish on Saturday October 26, 2019 at 10 AM. Burial at Cold Spring Cemetery. In lieu of flowers donations to Niagara Hospice would be appreciated. Visit pruddenandkandt.com.