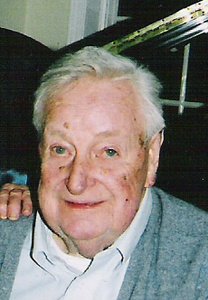 Please share a memory of Paul to include in a keepsake book for family and friends.
View Tribute Book
Paul J. Buddenhagen, 86, ofGasport, retired City Editor of the Lockport Union-Sun &amp; Journal, died Friday (April 3, 2009) in Eastern Niagara Hospital, Lockport Site, after a lengthy illness. He was born April 9, 1922, the son of Carl Buddenhagen and Anna Waple Buddenhagen. His special interest was music, both classical and jazz, and he liked to share his knowledge of the composers and performers. For two separate terms, he served as president of the former Lockport Concert Association. A history buff, he read widely about American history and was a self educated expert on the Civil War and the Revolutionary War. He was a World War II veteran of the Army Air Corps and served in the Pacific Theater on Guam and Iwo Jima. He entered the service when he was 19. He was a former member of the American Legion, B. Leo Dolan 410 the Lockport Lions Club and the Knights of Columbus, Council 319. His hobbies included reading and gardening. Surviving are his wife of 34 years, the former Mary Anne Sherwood; a son, Paul C. of Lockport; three step-children, Stephen S. Southard (Linda) of Toronto, Canada; Dr. Eric R. Southard (Kathylynn) of East Amherst, and Laura Southard of Seattle, WA; two grandchildren; five step-grandchildren; three great-grandchildren, and nieces and a nephew. He was the brother of the late Mary Jane Seddon and William Buddenhagen. Friends may call Monday 2 to 4 and 7 to 9 PM at Prudden and Kandt Funeral Home, 242 Genesee Street, Lockport. Flowers gratefully declined. Memorials may be given to the Buffalo Philharmonic Orchestra, Grace Episcopal Church, or the Lockport Public Library. <h3>Visitation</h3> Monday, April 6th 2 to 4 and 7 to 9 PM at Prudden and Kandt Funeral Home, 242 Genesee Street, Lockport.
To plant a beautiful memorial tree in memory of Paul Buddenhagen, please visit our Tree Store

A Memorial Tree was planted for Paul
We are deeply sorry for your loss ~ the staff at Prudden and Kandt Funeral Home, Inc.
Join in honoring their life - plant a memorial tree
Services for Paul Buddenhagen
There are no events scheduled. You can still show your support by planting a tree in memory of Paul Buddenhagen.
Plant a tree in memory of Paul
Print
Online Memory & Photo Sharing Event
Online Event
About this Event