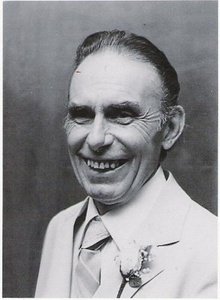 Maurice Armond Tetrault of Oakwood Drive, Pendleton died in his home on Friday, February 1st, 2008. He was born in Napersville, Quebec on March 14th, 1918, the son of Joseph and Rose (Hebert) Tetrault. He married Flore Landry in 1941. They had seven children, 2 sons and 5 daughters, and had been married for 64 years. His wife passed away in 2006. Maurice along with his two sons built his large family dwelling and apartment house. He loved car�pentry and gardening. He was also very passionate in his political views which was brought out to the public through his various articles he contributed to the Union Sun and Journal Mailbag and also in the Buffalo Newspaper. � Survivors are his two sons, Nourian and Kay (Fraser) Tetrault, and Lionel Tetrault, and five daughters, Carolyn and Ronald Simpson of Newfane, Constance Ward also of Newfane, Jeannette and Bruce Sullivan of Hamilton, Ontario, Canada, Elaine and Mike Zarbo of N. Tonawanda and Brenda Tetrault also of N. Tonawanda, one brother, Emile and Beatrice (Rabideau) Tetrault, Twenty-nine grandchildren and forty great grandchildren. His seven children will always have the most wonderful memories of their father with the knowledge of knowing without question where each one stood in his heart. He will be greatly missed by everyone. � Family and friends may call Monday, February 4th 4-7 PM at Prudden and Kandt Funeral Home, 242 Genesee Street, Lockport where a memorial service will be held Tuesday February 5th at 11 AM. � <h3>Visitation</h3> Visitation Times
To plant a tree in memory of Maurice Tetrault, please visit Tribute Store
Services for Maurice Tetrault
There are no events scheduled. You can still show your support by planting a tree in memory of Maurice Tetrault.
Visit the Tribute Store
Print
Share A Memory
Plant a Tree