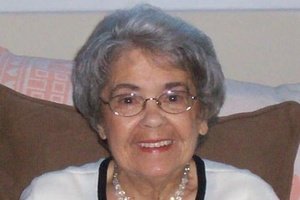 Beloved mother and grandmother, Frances Tracy Savittiere (b. October 4, 1917 in Eden Cntr., NY) passed away October 19, 2007.� She was the daughter of Daniel and Clara Tracy.� Fran was married to the late Joseph A. Savittiere, Sr. on September 26, 1942 in Buffalo, NY.� She was a member of St. Mary&amp;#39;s Roman Catholic Church in Lockport, NY.� She enjoyed bowling, golfing and traveling. � She is survived by her children Col. Ret. Joseph A. (Tami) Savittiere of Lorton, VA, Mariann Angelo of Lockport, Benjamin (Deborah) Savittiere of Lebanon, MO, Christine (James) Griesser of Orange, CA.� Fran was predeceased by her daughter Virginia Healy of Hilton Head Island, SC.� She is also survived by ten grandchildren, five great grandchildren and several nieces and nephews.� Fran was the sister of Rose (the late Samuel) Enzinna, Tina (the late Edwin) Kerwin and sister-in-law of Jane (the late Vincent) Tracy. �Fran was predeceased by her brothers Charles (Theresa) Tracy, Daniel (Mary) Tracy, Vincent (Jane) Tracy and her sister Connie (Joseph) Cavalieri. � Relatives and friends may call Sunday 4 to 8 PM at Prudden &amp; Kandt Funeral Home, 242 Genesee Street, Lockport where prayers will be offered Monday morning at 9:30 AM followed by a Mass of Christian Burial at 10 AM In St. Mary&amp;#39;s Roman Catholic Church, 5 Saxton Street, Lockport.� Interment will be in Cold Spring Cemetery.� Memorials to Lockport Memorial Hospital, 521 East Avenue, Lockport, N 14094 or to a charity of one&amp;#39;s choice would be appreciated by the family. <h3>Visitation</h3> Visitation Times
To plant a tree in memory of Frances Savittiere, please visit Tribute Store
Services for Frances Savittiere
There are no events scheduled. You can still show your support by planting a tree in memory of Frances Savittiere.
Visit the Tribute Store
Print
Share A Memory
Plant a Tree