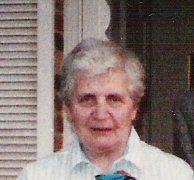 Mary E. Leonard, of Lockport, age 94, left her earthly home to be with her family and friends on Tuesday, October 2, 2007.� Daughter of Alfred and Rose Barone, Mary was the wife of William F. Leonard who passed away August 4, 1985.� She was predeceased by her brother Charles Barone and sister Carolyn Sapia. � She was the mother of Patricia (Shannon) Kennedy of Lockport, Rosemary (Peter) McQueen of Gasport, and Carol (Jarel) Maxely of Dry Prong, Louisiana.� Loving grandmother of Kelly (Israel) Morris, John (Heidi) Kennedy and Taryn Kennedy, Scott and Jeffrey McQueen, and Kristina Leonard.� She had two great-grandchildren; Gaege Morris and Liam Kennedy.� She is also survived by her sister-in-law Anna Kate Leonard and several nieces and nephews.� Her family was her life. � Mary attended Lockport High School and worked at Bell Aerospace in her early twenty&amp;#39;s.� She was a member of the Civil Air Patrol and liked to take short plane rides across the state in a Piper Cub with her dear friend Dorothy Watkins.� After she had children, she was employed as a school lunch monitor for many years.� She walked everywhere and loved to read and play bingo. � The family will be present to greet relatives and friends Thursday October 4 from 2-4 and 7-9 at Prudden and Kandt Funeral Home, 242 Genesee Street, Lockport, where prayers will be offered Friday morning at 9:30 AM followed by a mass of Christian Burial to be celebrated at 10 AM at St Mary&amp;#39;s Roman Catholic Church, 5 Saxton Street.� Internment will be at Cold Spring Cemetery.� Donations in Mary&amp;#39;s memory to DeSales Catholic School, 6914 Chestnut Ridge Road, Lockport, NY 14094. � <h3>Visitation</h3> Visitation Times
To plant a tree in memory of Mary Leonard, please visit Tribute Store
Services for Mary Leonard
There are no events scheduled. You can still show your support by planting a tree in memory of Mary Leonard.
Visit the Tribute Store
Print
Share A Memory
Plant a Tree