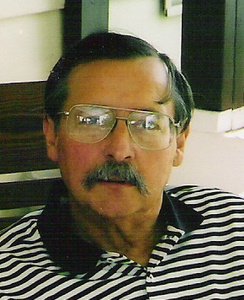 Please share a memory of Evan to include in a keepsake book for family and friends.
View Tribute Book
Evan F. Crane passed away Wednesday August 22, 2007 in his home after a valiant fight with renal cancer.� Born September 30 1947 in Lockport, he was the son of the late Evan "Skinny" and Gladys Kugler Crane.� Evan served in the U.S. Navy during the Vietnam War, earning amongst other awards the Bronze Star.� Evan was a school teacher at Orleans-Niagara Boces and was also a substitute teacher in the Lockport School District.� Evan in enjoyed photography and geneology and was a member of the American Legion B. Leo Dolan Post, V.F.W. and the 2 Cylinder Club. � Evan is survived by his wife of 20 years Beth Fifield-Crane.� Brother of Carl (Donna) Crane of Binghamton, Sandra (John) Hinton, Judy (Henry) Wright, Kathy (Joe) Rucci, Paula (Paul) Mayers and Carla (Keven) Budde all of Lockport and the late Paul (Elsie) Crane.� Evan is also survived by several nieces and nephews. � Friends may call Sunday 2 to 4 and 7 to 9 PM in Prudden and Kandt Funeral Home, Inc., 242 Genesee Street, Lockport, where prayers will be offered Monday at 9:30 AM, followed by a Mass of Christian Burial in St. John the Baptist R.C. Church, 168 Chestnut Street, Lockport.� Memorials to the charity of ones choice would be appreciated by the family. <h3>Visitation</h3> Visitation Times
To plant a beautiful memorial tree in memory of Evan Crane, please visit our Tree Store

A Memorial Tree was planted for Evan
We are deeply sorry for your loss ~ the staff at Prudden and Kandt Funeral Home, Inc.
Join in honoring their life - plant a memorial tree
Services for Evan Crane
There are no events scheduled. You can still show your support by planting a tree in memory of Evan Crane.
Plant a tree in memory of Evan
Print
Share A Memory
Plant a Tree