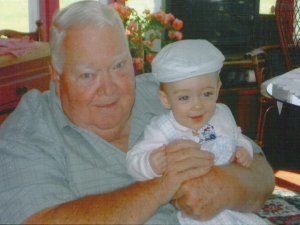 Robert F. Bennett entered into rest July 5, 2009 in Millard Fillmore Suburban Hospital, following a brief illness. Born January 26, 1934 to the late Charles Cedric Bennett. Robert was the beloved grandson of the late Mahlon and Gertrude Bennett. Robert was a veteran of the US Airforce and served in the Korean Conflict in Germany. He was an avid horseman and was loved for his wonderful personality and humor. Robert was a salesman at KiPo Motors and achieved his dream of owning a tavern from 1982 to 1996, Bennetts Tavern. He was the former owner of B&amp;B Lumber. Robert is survived by his wife of 49 years, Barbara (Morse) Bennett; father of Jeffrey Paul Bennett, Wendy (David) Farnsworth and Cyd (Dennis) Cehulik; grandfather of Christian, Ryan and Lee Bennett, Evan Bennett Farnsworth and Robert Bennett Cehulik; brother of Mahlon (Bud) Bennett and Mary (Dave) Wintersteen. A Memorial service will be Thursday at 1PM in Prudden and Kandt Funeral Home, Inc., 242 Genesee Street, Lockport. In Lieu of flowers Memorials to the Terry's Corners Fire Co., would be appreciated by the family. <h3>Services</h3> A Memorial service will be Thursday at 1PM
Print