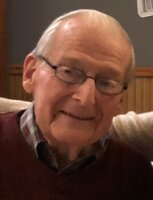 Barry Joseph Frombgen, 81, of Lockport, NY passed away on Friday, November 18, 2022, at Millard Fillmore Suburban Hospital. Born March 19, 1941, Barry was the son of the late George and Margaret (Lamont) Frombgen. Barry married Shirley (Metz) Frombgen on March 21, 1987, at St. Patrick’s Church in Lockport. They enjoyed 35 years of marriage together.

Barry attended St. Patrick’s, North Park, and Lockport Sr. High School, where he graduated in 1958. He went on to study at the General Motors Institute, which was sponsored by Harrison. He graduated with a mechanical engineering degree and a heat transfer major. Barry spent the next forty years at Harrison Radiator, and the last eleven years of his career for the North American Truck Group, all of it being with General Motors. His forty-one-year career with GM was spent completely designing, developing, and testing automotive heating and air conditioning systems. He retired in 1999 as a Senior Project Engineer.

Barry is survived by his wife, Shirley, and his Brother Daniel (Mary) Frombgen. He is also survived by his brother-in-law Robert (Diane) Metz, and several cousins, nieces, and nephews.

A private service will be held with immediate family.  Donations to a charity of one’s choice would be appreciated.  Visit pruddenandkandt.com.