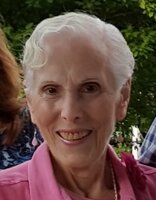 Dolores Watson of Lockport died peacefully at home under Hospice care. Born April 24, 1933 to the late Joseph (Papa Joe) and Isabelle Gervaise. Dolores grew up in Lockport and was a proud graduate of St. Joseph’s Academy.

Dolores was a devoted wife, mother, grandmother and great-grandmother. “Grandma Watty” could always be seen with her late husband, Jerry, on the sidelines of their children’s and grandchildren’s hockey, soccer, baseball, softball, basketball, track, volleyball, dance recitals, figure skating competitions, and musical productions. “Go Watty!” She was an expert homemaker, cook, and reader, who also enjoyed gardening, sewing and crafting.

There will be no prior visitation. Private services will be held at the convenience of the family. Flowers are gratefully declined. Memorial donations can be made to the Lockport Public Library and Niagara Hospice. Online condolences may be left at pruddenandkandt.com.