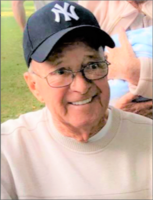 Bob graduated from East High School and proudly served four years as a radioman in the U.S. Coastguard.  In 1953 a photograph of him ascending the tallest mast of the Coastguard Eagle sailing ship was featured in an article in National Geographic.

After his discharge he married his high school sweetheart Anita Randazzo and began his career at Linde Corp. in Buffalo.  With Anita’s encouragement, he also enrolled at Canisius College and embarked on an educational journey that would span eighteen years and earn him a PhD in education from the University of Buffalo in 1975.  Robert taught business administration at NCCC for over twenty years, also serving as chair of the Business Education Division.  After his retirement he served as the founding administrator of the Niagara Small Business Development Center.  A thoughtful and caring educator, he touched the lives of countless students.  Robert was a member of St. John the Baptist RC Church, the Knights of Columbus, and was a 4th Degree.  He was an avid reader who loved spending time in Lockport and Bonita Springs, Florida with his many friends on the golf course, playing cards and lunching out with his beloved wife.  Robert cherished the many visits and time spent with his children, grandchildren and great great-grandchildren.  A true gentleman, he was the perfect example of a life well lived.

Relatives and friends are to be invited to a mass of Christian Burial at St. John the Baptist RC Church, 168 Chestnut St., Lockport to be celebrated Saturday, Sept. 24th at 12:30 pm.  Inurnment will be held at Queen of Heaven Cemetery.  Donations to DeSales Catholic School would be appreciated by the family.  Visit pruddenandkandt.com.