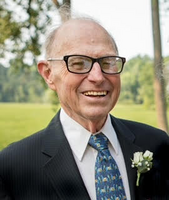 Bruce Daniel Giles born March 15, 1929 in Union Springs NY to Harold and Florence Giles, died September 12, 2022. After attending grade school in a one-room schoolhouse Bruce scored the then highest test score for the MIT entrance exam. Bruce, an avid baseball fan, excelled in Lacrosse and Glee Club while at MIT and graduated in 1951 as a chemical engineer. Bruce married his high school sweetheart Theresa Stowell in 1951 and began his career with Dupont in Niagara Falls NY. In 1953 he enrolled in The Ohio State University and earned both his Master’s and Doctoral degrees by 1957. Bruce enjoyed a career spanning over 35 years in the chemical industry with Durez, Olin, Dupont and Oxy where he developed notable patents for production methods for the budding chemicals and plastics industry in Niagara Falls. Bruce had a notable volunteer life also. Bruce loved the outdoors and was Scoutmaster for over 10 years. Bruce gave his time generously to Catholic Charities to assist in the annual funding drives.

Upon retirement, Bruce founded Rainbow Vineyards located on upper mountain road in the town of Lockport. For over 30 years you could see Bruce tending his vineyard daily, and his produce could be found every fall season at local area supermarkets and food pantries.  Bruce’s vineyard was his pride and joy and he always shared all of his vast knowledge with young aspiring vintners. During winter months he enjoyed his passion for world travel but always returned to his work in the vineyard.

A private service was held for the family with burial at the Cold Spring Cemetery in Lockport, NY. In lieu of flowers the family requests a donation in his name be made to his favorite charity St. Jude Children’s Cancer Research Center in Memphis Tennessee.