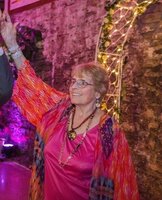 Judith Ellen Collins, beloved wife, mother, grandmother, great-grandmother, and friend to many, died Friday, July 15, after a brief period of declining health. A town of Lockport resident for more than 60 years, Judy was born on March 8, 1938, in Buffalo, New York. She was the daughter of William J. Murphy and Eleanor Margaret Brady and the step-daughter of Norma M. Bannister. After graduating from Mt. St. Mary Academy in Kenmore, New York, Judy attended nursing school at the University of Buffalo, and later expanded her education at Niagara County Community College.

Judy was a partner with her husband in business for over 40 years. Together they ran numerous successful businesses including Collins Realty, Collins Accounting, and a land development company. After the death of her husband, Judy also worked in Collins Accounting business owned by her son, William J. Collins.

Judy was also a member of the Niagara County Historical Society and was active in the Lockport Board of Realtors and the Town of Lockport Republican Committee.

Judy Collins spent her life in business, but is largely a self-taught artist. She played piano her entire life, and wrote and composed numerous original songs. Judy studied art under various artists in the community, and never stopped trying to improve upon what she considered her true calling - art. A prolific painter, Judy worked in virtually every medium, but preferred acrylic, pastel, colored pencil, and water color.

Judy was a regular exhibitor in group shows at Van Der Plas Gallery in the East Village in New York City.

Judy was a member of the Niagara County Arts Guild where she served as Treasurer and was an exhibiting artist.

Her exhibitions included the Kenan Center, The Presbyterian Home (sponsored by the Niagara Art Trail), The Dale Center, Niagara County Historical Society, Frames by Ames, several banks, businesses, and professional offices, 247 Gallery, NAAC in Niagara Falls, and Impact Art Gallery in Buffalo, among many others. Her artwork can be viewed on her webpage ArtByJudyCollins.com or on Instagram @heyjudel.

Judy often gave away her paintings to her numerous admirers. Even while in the hospital, Judy insisted on having her painting tools brought to her and painted numerous pictures which she gave away to the doctors and nurses as presents.

Judy was also the President of the Collins Family Foundation, a 501 (c) (3) Non-Profit Corporation and contributed all proceeds from her art sales to charity. The Foundation also sponsors a scholarship and supports local volunteer organizations.