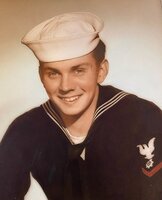 Cunningham - Richard (Dick) Of Lockport, NY, June 28, 2022.  He was born on December 16, 1931 in Buffalo, NY;  Richard enjoyed horseback riding, fishing and woodworking.  Most of all he loved spending time with his family.

Son of the late John and Margaret (McCormick) Cunningham;  predeceased by siblings;  Josephine, Jim, John and MaryLou;  also survived by nieces and nephews.

Services to be held at a later date.