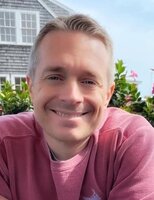 Jon Ross Randall Wilson of Buffalo, 43, passed away peacefully on April 15th, 2022 after a valiant battle with pancreatic cancer.

In addition to his passion for helping others through his law practice, Jon Ross was a talented and dedicated guitarist who loved music of all genres. He started playing guitar at 16 years old and eventually formed the band Kosmic Barnyard with several of his dear friends. A highlight for Kosmic Barnyard was opening for G. Love & Special Sauce, Rufus Wainwright, and Edward Sharpe and the Magnetic Zeros in Buffalo. He saw hundreds of concerts, most fondly the Grateful Dead, Phish, and Wilco. Jon Ross and his wife Lydia, an avid singer and piano player, enjoyed writing, playing, and recording songs together. He performed at the annual fundraiser Lawyers for the Arts multiple times, most recently at the March 2022 show.

Jon Ross’ love for adventure began at an early age. He was active in Boy Scout Troop 82, earned the rank of Life Scout, and eventually hiked Philmont Scout Ranch with his father. In addition, he sailed the Great Lakes and visited 11 countries around the world. From summiting Mt. Kilimanjaro, to SCUBA diving on shipwrecks in the Philippines, to skydiving in Switzerland, he had a curiosity for the world that could only be satisfied by his travels with family and friends.

Though he was a skilled attorney, a gifted musician, and a seasoned world traveler, Jon Ross will best be remembered for his kind and loving heart.

Jon Ross was predeceased by his grandparents Ross A. and Dorcas Toney, and Randall E. and Dorothy Wilson, as well as his beloved dog, Koufax.

A memorial service will be held at 2 p.m. on Friday, April 22nd at the First Presbyterian Church located at 21 Church Street in Lockport, New York. Jon Ross has requested that his friends, family, and colleagues take the day off and enjoy a long weekend because “everyone works too much and life is too short.” We also encourage attendees to wear purple, his favorite color. There will be a reception to follow. Details will be announced after the service.

In lieu of flowers, contributions in memory of Jon Ross may be made to the Pancreatic Cancer Action Network at pancan.org/donate, or through the mail (1500 Rosecrans Ave., Suite 200, Manhattan Beach, CA 90266). You may also donate to Roswell Park Comprehensive Cancer Center at give.roswellpark.org, or through the mail (P.O. Box 631, Buffalo, NY 14240).